I have to tell you that when I started really cooking, one of the things I was most scared to make was pie crust. I’d only heard how hard it was, how bad tough, non-flaky crust can be, how careful you have to be, all that stuff. And I believed it. Wanna know a secret? I think pie crust companies secretly spread these rumors that everyone will screw up pie crusts and that they’re hard and time-consuming to make so you’ll go buy their refrigerated pie crusts. Also, they want you to believe that there’s little difference in taste or texture between those pie crusts and the ones you can make yourself. That is a big, fat lie. Light and flaky pie crusts are so much easier than you could ever imagine!

If you’ve never made your own pie crust, today is your day. It’s honestly not that hard to make your own and the results are so phenomenally different that you’ll never go back. It’s easy, it’s super tender and flaky, it’s forgiving, and you can so totally do it. Don’t let the pie crust Mafia make you believe otherwise.
You’ll need all-purpose flour, table salt, ice water, and shortening or lard (y’all know we love butter, but making a pie crust with butter is a little tricky, so try and master it with these fats first before you move onto butter–but when you’re ready, we have a recipe for you!) 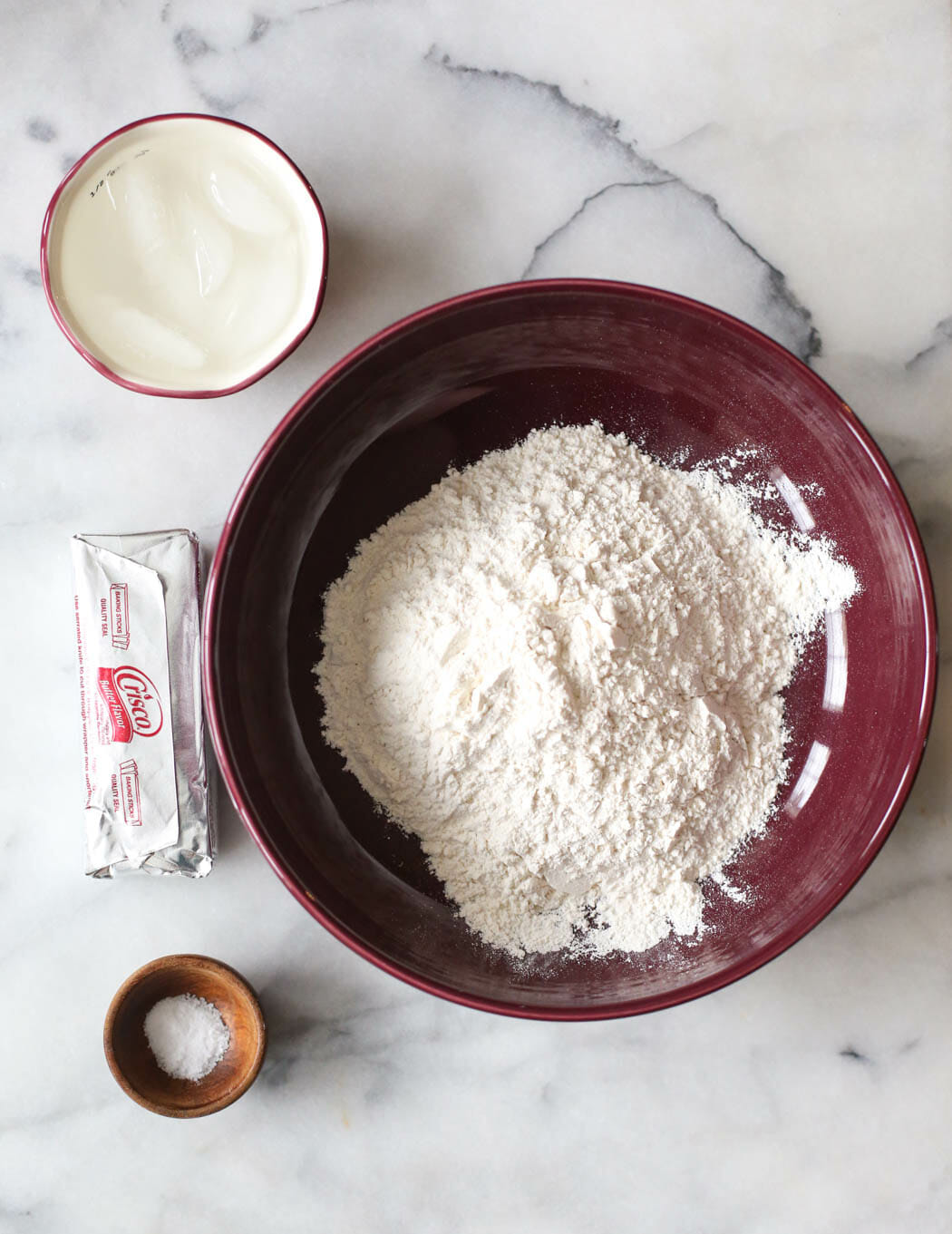 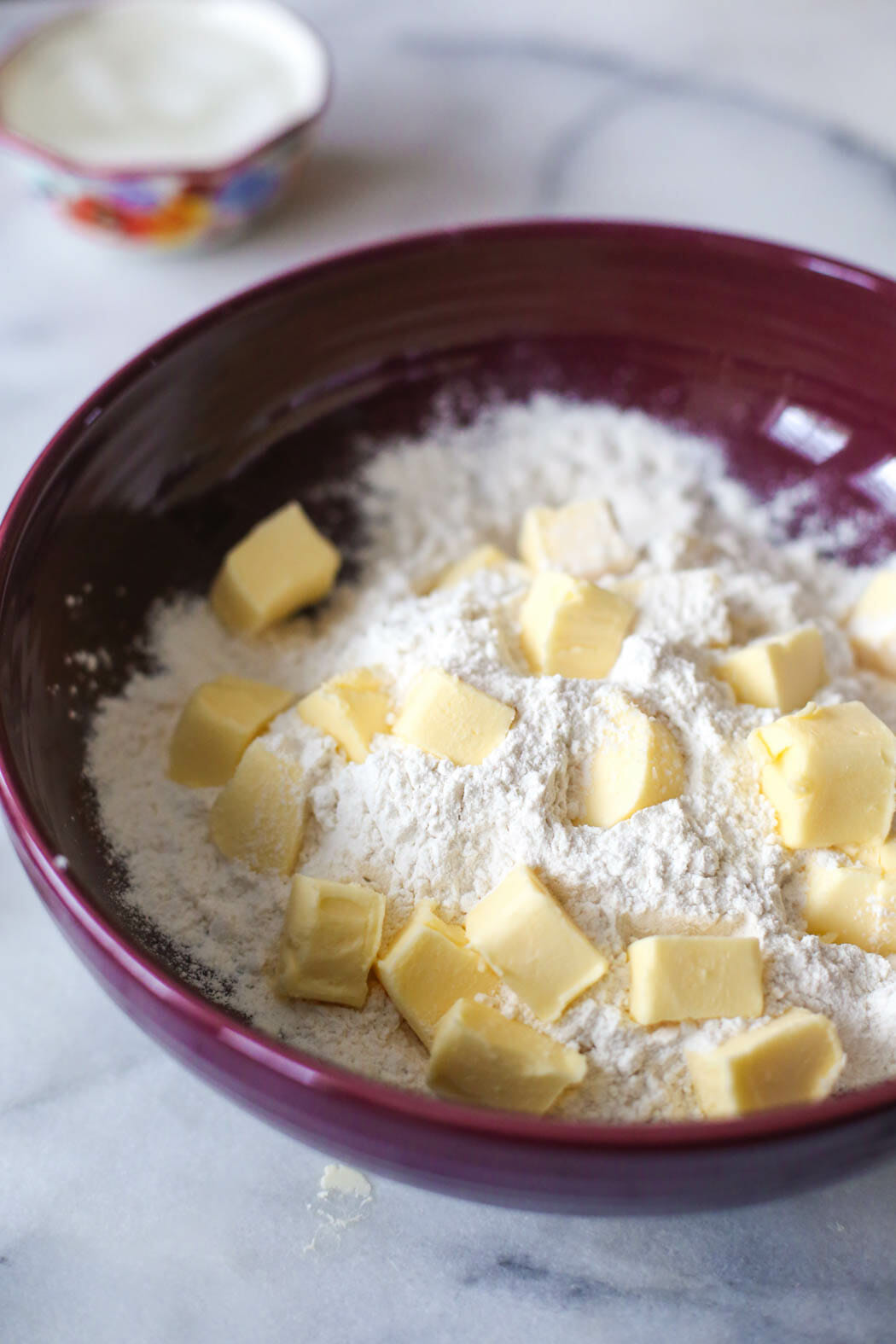 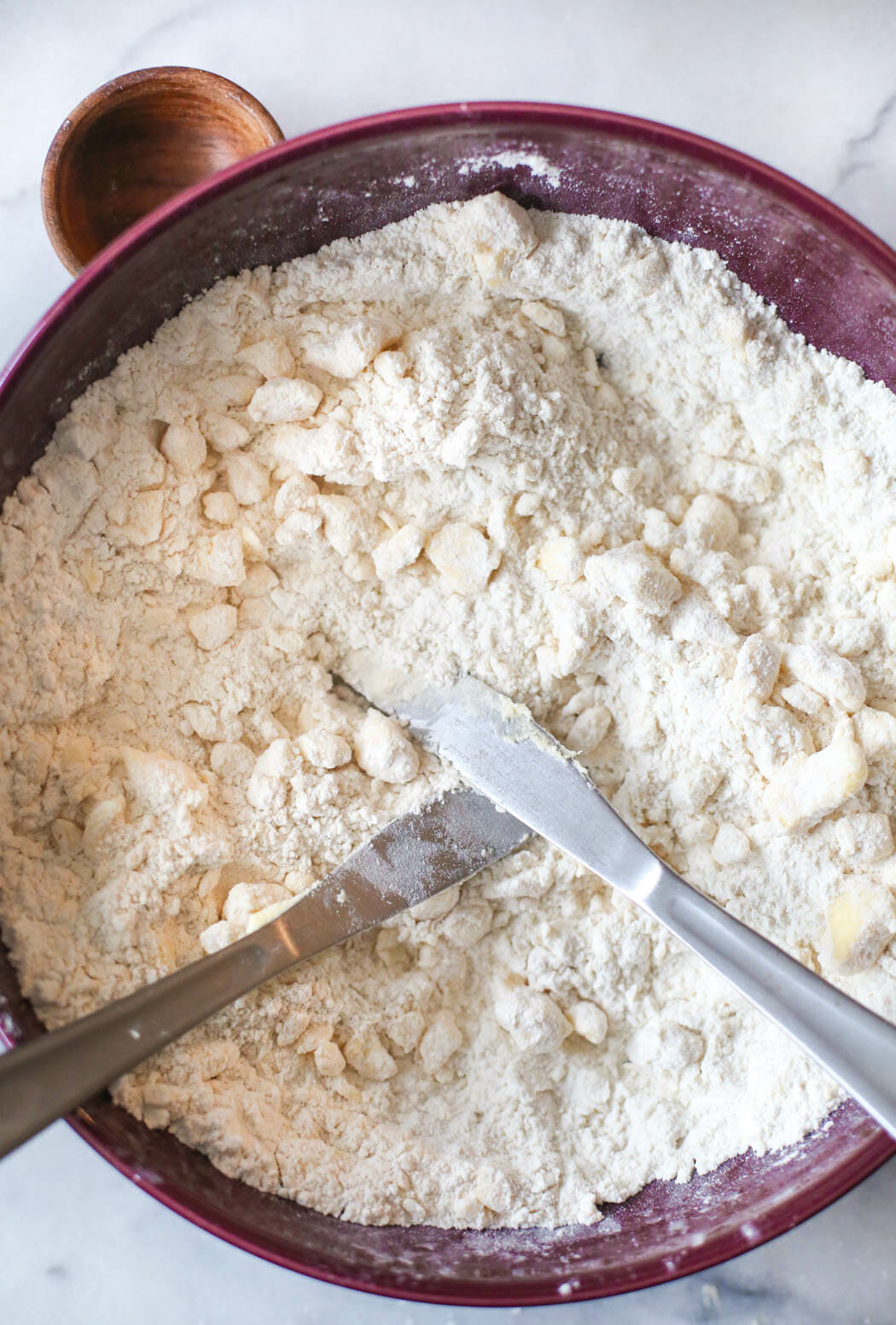 Now, this is where it gets a little tricky, but don’t be scared. Start sprinkling the ice water by about a tablespoon at a time over the flour/shortening mixture.

Very, very gently, turn the dough with your fingers so it gets exposed to the water. You’re NOT mixing, just trying to moisten all of the flour/shortening mixture. Gradually, all of the flour mixture will be moistened. Gently pat the dough into a ball (it should come together easily but not be sticky). 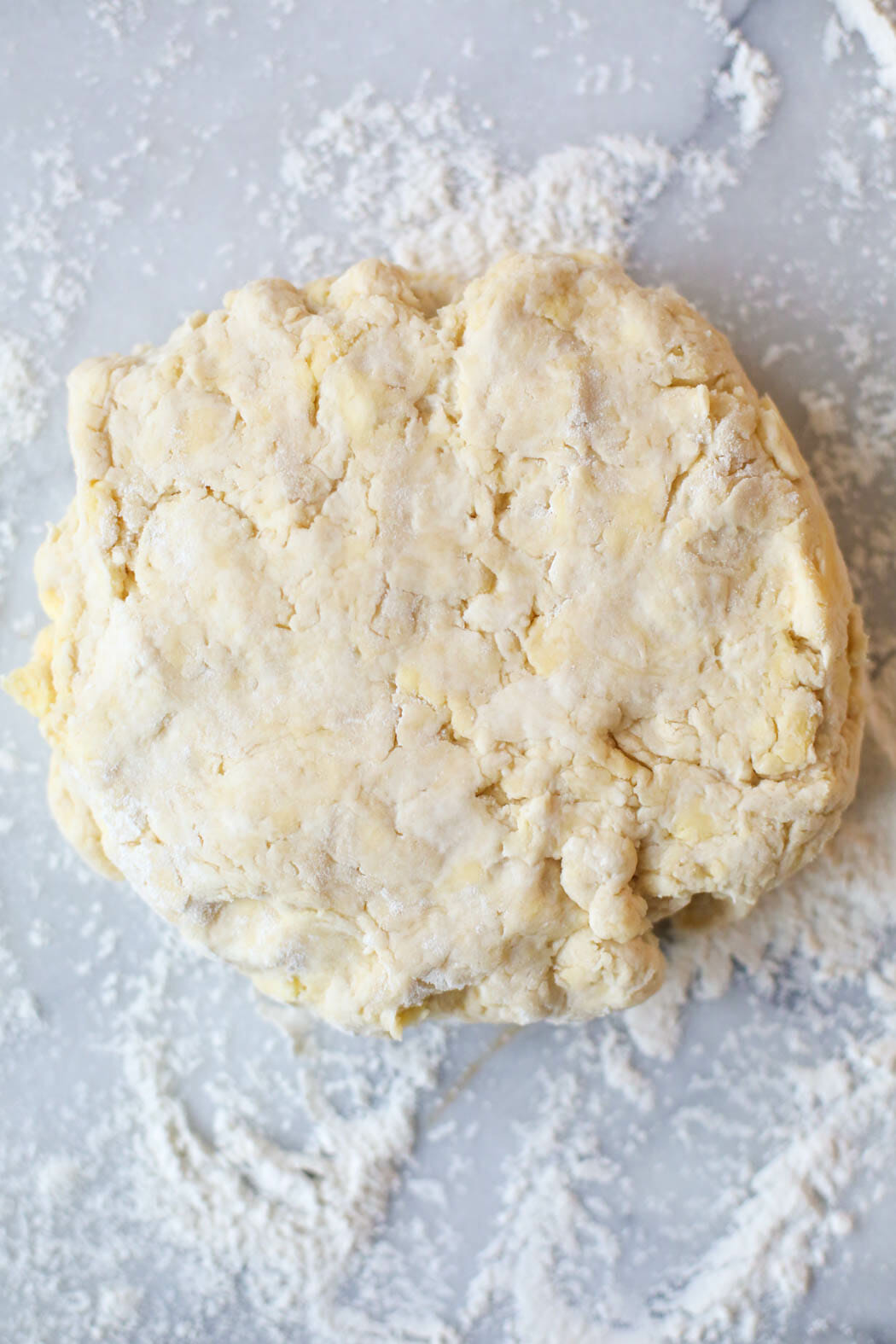 When you’re ready to roll out your pie crust, lightly flour your work surface and place the dough ball on the surface. One of the keys in making pie crust is to handle the dough as little as possible. Don’t freak out TOO much; like I said, this recipe for crust is pretty forgiving, but at the same time, the less you touch it, the more tender and flaky it will be. Starting in the center, roll the dough out into a circle-ish shape, about 1/8″ thick. 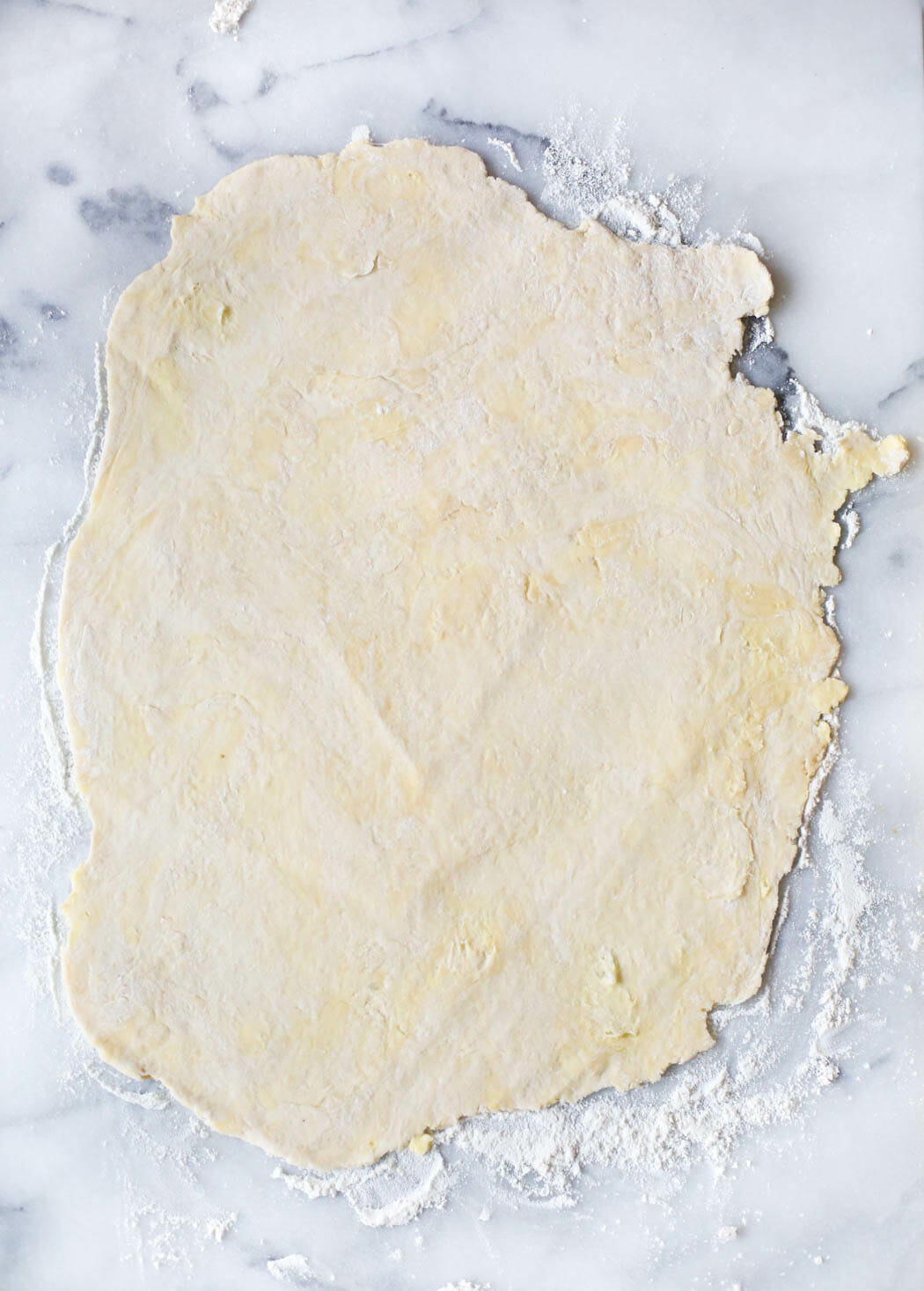 When you’ve reached your desired thickness, place the rolling pin in the middle and gently fold the crust over the rolling pin. Lift the dough onto your pie plate 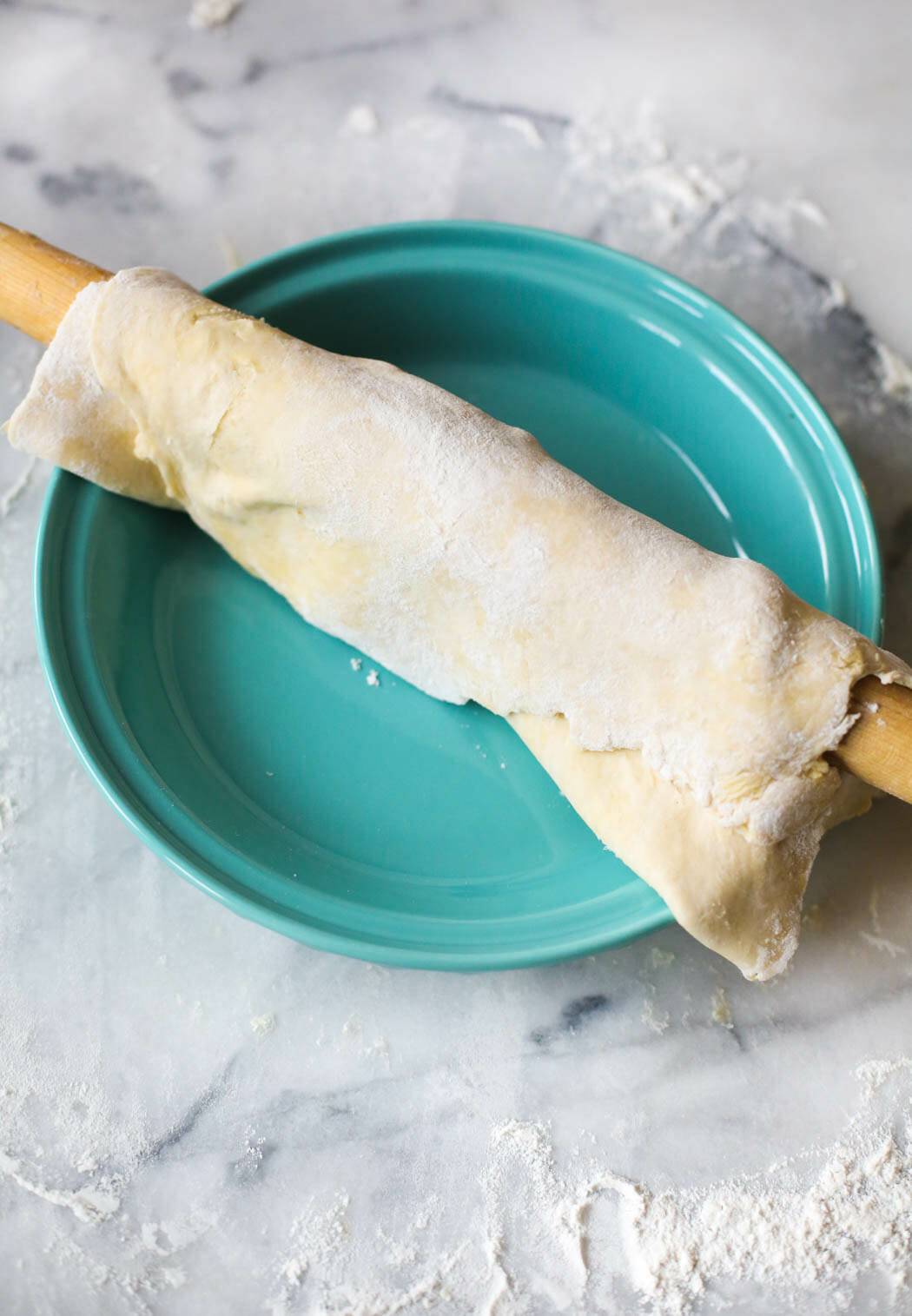 and unfold it (gently; notice a theme here?). 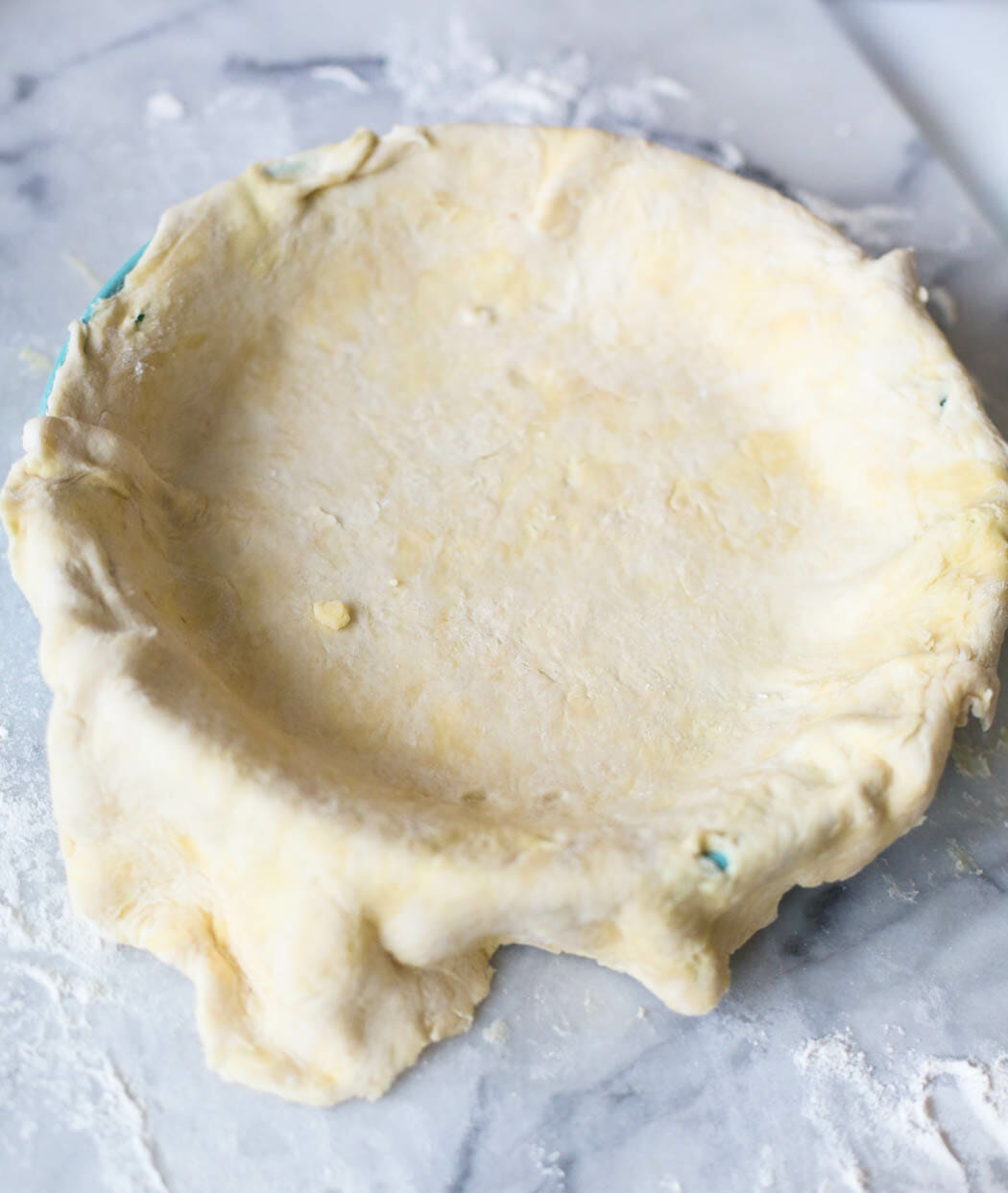 The Edge of Reason

Unless I’m planning on doing something fancy schmancy with my edges, I just run a sharp knife around the edges of the pie plate, cutting off the excess dough. Then I use my thumb and fingers to make kind of a big, wavy edge on the crust, but that’s just how I do it; there are lots of pretty pie edges. 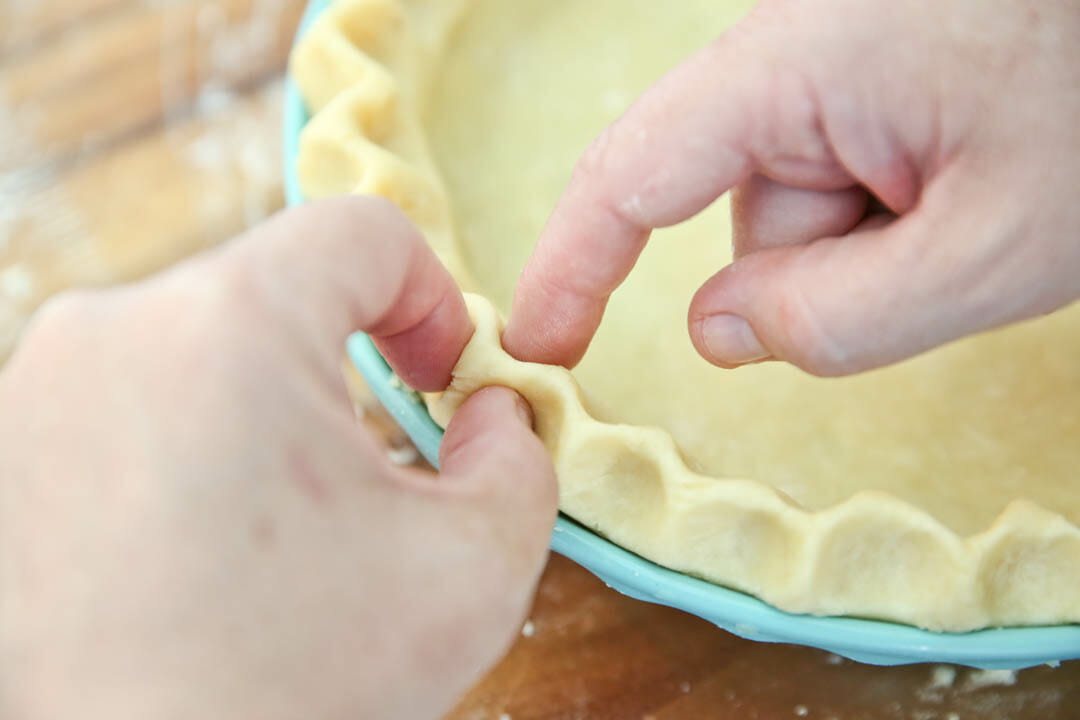 Sometimes a recipe will call for a pre-baked crust. Some people place “weights” (either little balls specifically designed for this purpose, or even dry beans) in the pie to keep it from puffing and shrinking, but I’ve found that with this recipe, I don’t need them. Just prick the bottom of the crust with a fork and bake at 450 for 10-12 minutes or until golden-brown.

When you put the crust on top, you’ll need some way of letting the steam out. This is where you can really wow people. I had a roommate who would cut a cute little heart in the top crust; some people cut some decorative slits so when you put it on top, it spreads a little and looks all pretty. My favorite thing to do is a lattice top.

How to Make a Lattice Crust

Place the rolled-out bottom crust in the pie plate, fill your pie as desired, and then roll out the top crust and cut it into strips about 1″ wide. You can use a knife or a fluted pastry wheel.

Now, lay 4-5 strips vertically on top of your pie… 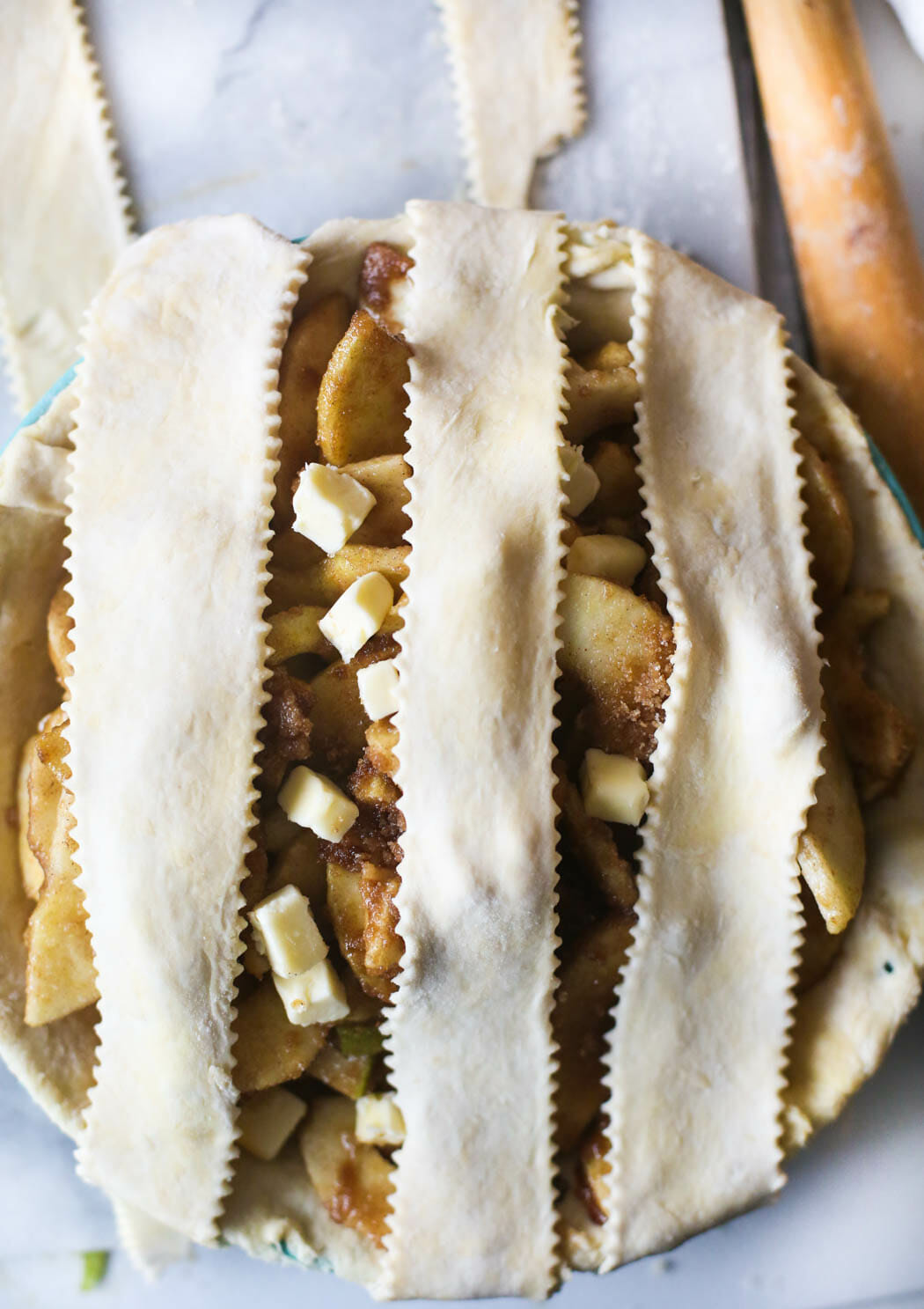 Now fold every other strip back and lay a horizontal strip right under the part you’ve folded back. 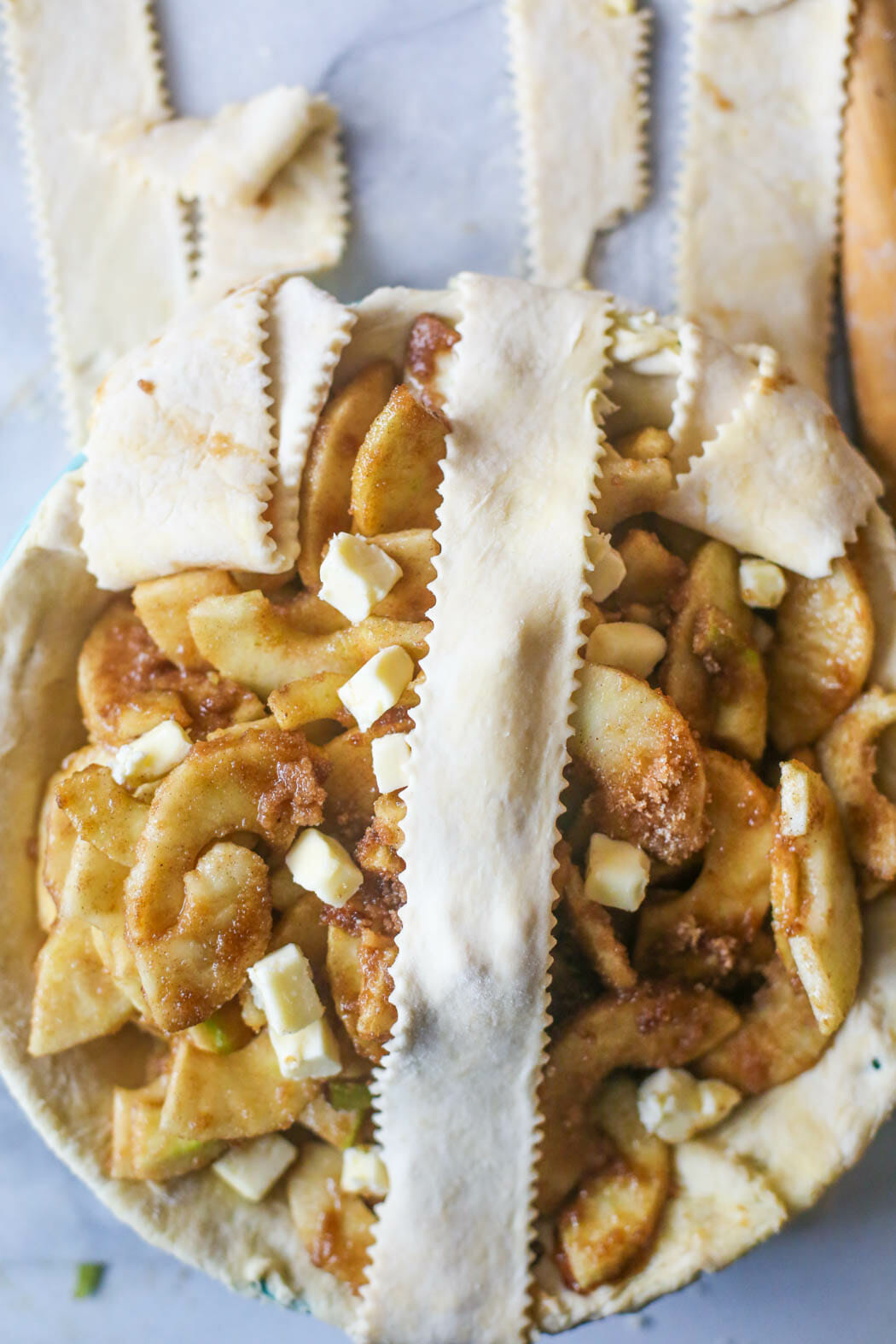 Unfold the vertical strip so it lays on top of the horizontal strip.  Repeat this step, this time folding back pieces that you didn’t fold before, and then continue repeating until the pie is covered. 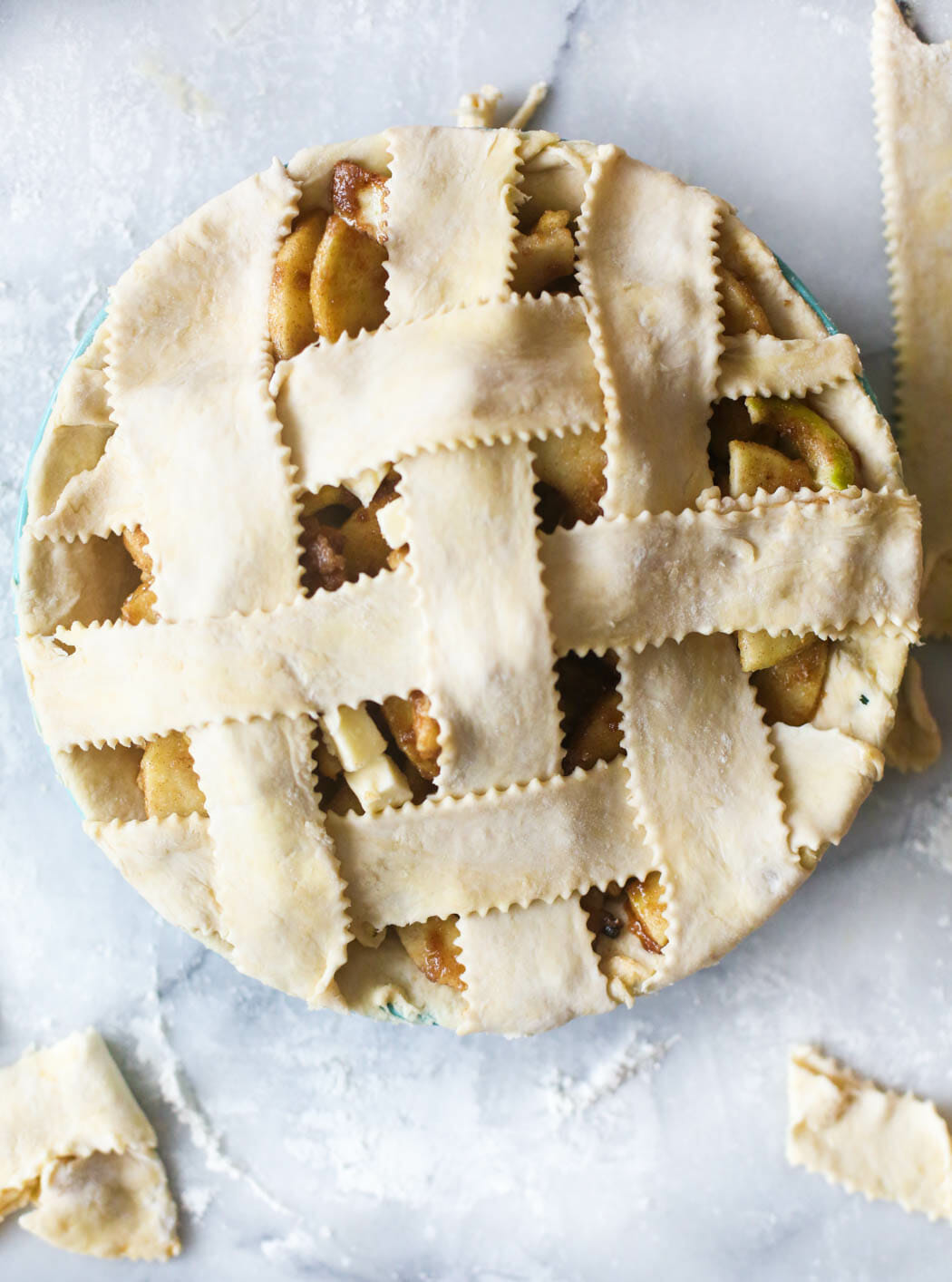 Now gently press the crust strips into the bottom crust and finish the edges however you like! This step goes for any way you top your pie…

If you want, you can brush the top of your crust with some melted butter and sprinkle with sugar or cinnamon sugar.

Some people really like that pretty, golden shine that some pies have. Personally, I can take it or leave it and I usually leave it. I have egg issues (in that they tend to creep me out, not that I’m deathly allergic) and I’ve noticed a distinct, yucky, burny egginess sometimes when I put an egg wash on a crust. Also, if the eggs aren’t thoroughly beaten or if there’s more egg in some places than others, I’ve found that the egg wash doesn’t come out so pretty. BUT if you’ve ever wondered how to get that pretty, shiny pie and want to do it, beat an egg very well and then brush the crust top (or edges if your pie doesn’t have a top) with the beaten egg and bake. You’ll want to keep an eye on how it’s browning, though, you don’t want your pie to look burned. Personally, I’ve found that this crust browns nicely and looks perfectly pretty without an egg wash.

You’ll want to keep an eye on your pie as it’s baking because sometimes, the crust gets brown long before the pie is done. If you see this happening, take some tin foil and punch a hole a couple inches in diameter in the middle. Remove pie from oven and carefully, loosely place the shield over the pie (loose because you still want the steam to be able to escape). This will keep the edges from getting too brown while the middle finishes cooking.
This is a ton of information, but you’ll be a pro at pie crust making before you know it!
Print

A light and flaky pie crust recipe that is perfect for sweet or savory pies!

1/2 teaspoon table salt
1/3 cup+ 1 tablespoon shortening (I prefer butter flavored but either works; look for it in sticks)
Ice water (probably about 1/4 c.)

Start sprinkling the ice water by about a tablespoon at a time over the flour/shortening mixture. Very, very gently, turn the dough with your fingers so it gets exposed to the water. You’re not mixing, just trying to moisten all of the flour/shortening mixture. Gradually, all of the flour mixture will be moistened. Gently pat the dough into a ball (it should come together easily but not be sticky).

When ready to use, handle as little as possible according to recipe directions. See blog post for tips and tricks for pie-making!