If I was trapped in some horribly unrealistic nightmare and could only chose one and only one thing to eat off of the Thanksgiving table, I would undoubtedly choose the stuffing.  It’s been my favorite thing about thanksgiving since I was a kid.  I don’t even like pumpkin pie or (gasp!) turkey all that much!  But stuffing?  Ohhh I could eat a whole lot of stuffing (or dressing if you must.  I call it all stuffing whether it’s stuffed in the bird or not!)   My family has been making the same stuffing recipe for years and a few Thanksgivings ago my sister and I experimented by using sourdough bread, tangy lemon juice, and lots of fresh herbs.  It was amazing, so for the past few years I’ve been perfecting that version.  I had planned to share my recipe with you until last week when curiosity got the best of me and I tried out this recipe I found on-line.  I was intrigued because it had some of my favorite flavors, but ones I wouldn’t expect to see in a stuffing recipe: Parmesan cheese and marinated artichoke hearts.  But aside from that, the bones of the recipe were very similar to my own sourdough stuffing so I had a feeling it would be good.  And it was  The parmesan is subtle and the artichokes add flavor without taking over the whole thing.  It all blended together in one delicious dish.  Take a look at Kate’s Italian Sausage Thanksgiving Dressing too- with a completely different flavor profile it’s equally delicious in a different way!  I made it last year and absolutely loved it.  Heck, make both and skip the salad. 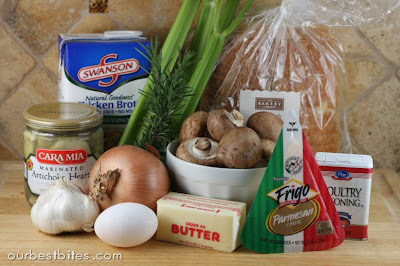 You’ll want to chop up your sourdough bread into about 1/2 inch pieces. 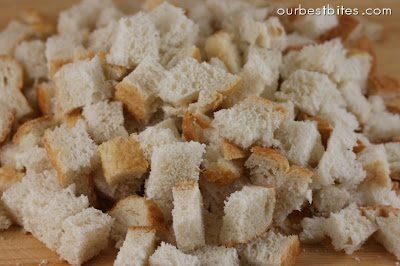 This step isn’t included in the recipe, but I chose to lightly toast my bread first since it was a brand new loaf and I was afraid it would just turn to mush when I tried to stir things together if I didn’t.  Plus I love the texture of semi crunchy, semi soft bread in stuffing. 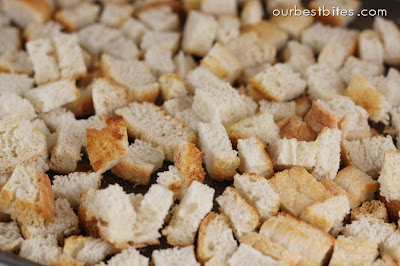 While the bread is toasting, melt some butter in a hot skillet 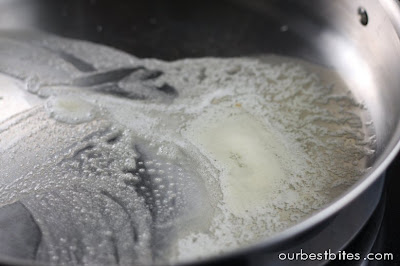 and add in garlic, onions, celery, and mushrooms.  The recipe calls for 1 lb of mushrooms, sliced.  I’m not a huge mushroom fan, so I did about 12 ounces (chopped, not sliced) and added more celery instead. 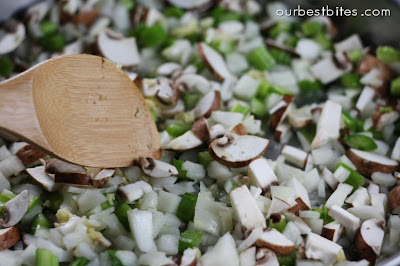 While the veggies are cooking, you can prepare your other ingredients (three of my most favorite things!) Parmesan cheese, fresh rosemary (you could use dried), and marinated artichoke hearts. 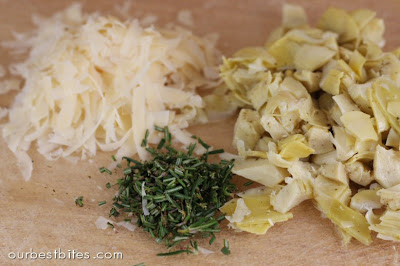 Now back to those vegetables, when they’re tender they can go into a bowl. 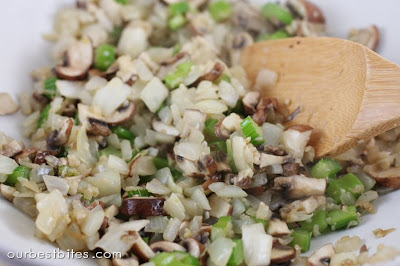 And then you add broth and seasonings 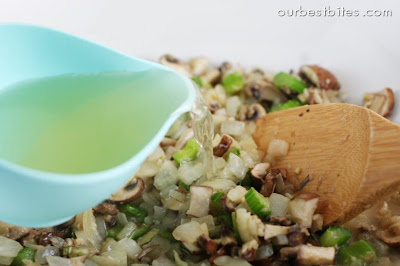 and bread, Parmesan, rosemary, and artichokes. 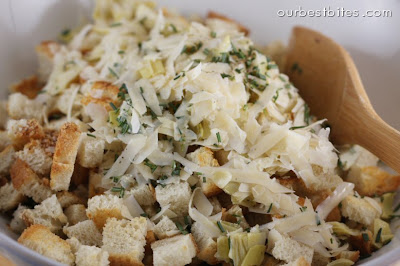 After you stir it all up give it a good taste and adjust the seasonings if you need to, when it’s perfect, add in the beaten egg.

Stir it to combine well and then put it in a 9×13 baking dish.  At this point you can cover it and pop it in the fridge, so feel free to make it a day ahead of time and save yourself some work on Thanksgiving morning!

If you like soft stuffing, cover the pan during baking.  I like my stuffing lightly toasted on top and nice and soft underneath so bake uncovered. 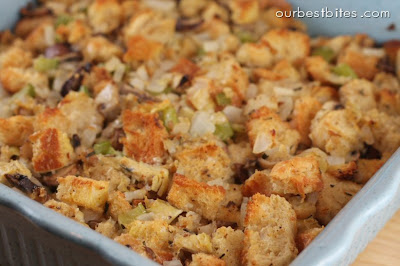 Keep warm until ready to serve and then dig in! 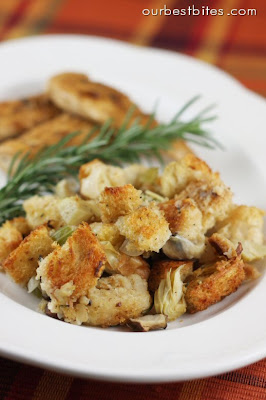 *If desired, first toast chopped bread in a 400 degree oven until lightly toasted, about 10 minutes.

In a 12-in. frying pan over high heat, cook mushrooms, butter, onions, celery, and garlic, stirring often, until vegetables are tender and lightly browned, about 10 minutes. Pour into a large bowl. Add a bit of broth to pan (a few tablespoons) and stir to scrape up browned bits. Add to bowl.Pour 2 cups broth into bowl and add bread, artichoke hearts, parmesan, poultry seasoning, and rosemary; mix well. Add salt and pepper to taste.  (If you need to add a little more broth at this point, go for it.  I added a bit more because I wanted my stuffing really moist.)  Add beaten egg and mix into stuffing.Preheat oven to 325° to 350° (meaning the temperature is flexible if it’s going in the oven at the same time as other things.  If it’s going in alone, bake at 350).  Spoon stuffing into a shallow 3-qt. (9- by 13-in.) casserole pan. For moist stuffing, cover with foil; for crusty stuffing, do not cover. Bake until hot (at least 150° in center) or lightly browned, about 50 minutes.

Make ahead: Up to 1 day ahead, make stuffing, put in casserole, cover, and chill. Allow about 1 hour to bake.

And not that I support calorie counting on Thanksgiving at ALL, but I do know many people appreciate nutrition facts, and since they’re available, here you go.  (These are per serving, assuming you’re serving 12 and it makes about 10 cups.)
Calories: 195 Protein: 9  Fat: 6.226  Fiber: 2.7 Carbohydrate: 26