So I had my oldest child relatively young (I realize that now–at the time, I felt like a senior citizen) when I was 24. For most of his life, I have felt like a pretty young mom, mostly in touch, kinda-cool-but-not-in-an-Amy-Poehler-in-Mean-Girls kind of way.

not a cool mom. just a regular mom.

Now he’s 13, almost 14, and I don’t know what he’s talking about most of the time. I sent him pictures of a whole bunch of t-shirt options and asked him what he thought and he replied with a terrible picture of his friend, so when I saw him again, I said, “I guess you didn’t like the shirts?” And he said no, the shirts were awesome, how could I not get that from his very detailed and unambiguous response?? Geez, mom. The words, “It’s a teenager thing, you wouldn’t understand,” are uttered regularly. I find myself feeling clunky and out of touch. I hear myself say things my parents used to say that made me cringe back in the day. I

So naturally, I rely on all these young whippersnappers to let me know what’s cool these days. Like Snickerdoodle White Hot Chocolate at Starbucks. I’ve heard a lot about Snickerdoodle White Hot Chocolate lately. I’m not a huge fan of steamers or white hot chocolate, so I was nervous (much like eggs, I have complicated dairy issues and I like the smell of my warm milk covered up by chocolate, thank you.) But this was truly delicious. It’s kind of like a vanilla steamer (steamed milk with vanilla syrup), but elevated. Cinnamon and a tiny hint of almond extract definitely remind me of holiday cookies, like the ones I used to eat in 1892 when I myself was 13.

To make this, you’ll need cinnamon, a tiny bit of almond extract (we’re talking, like, drops here), vanilla extract, a pinch of salt, white chocolate chips, and whole milk (definitely whole. I mean, I can’t make you, but if you come back and say, “I made this with skim and it tasted like cinnamon water,” I’ll take your Fortnite away.) You’ll also definitely want sweetened whipped cream (you can make your own, but let’s be real, I’m using canned whipped cream.) 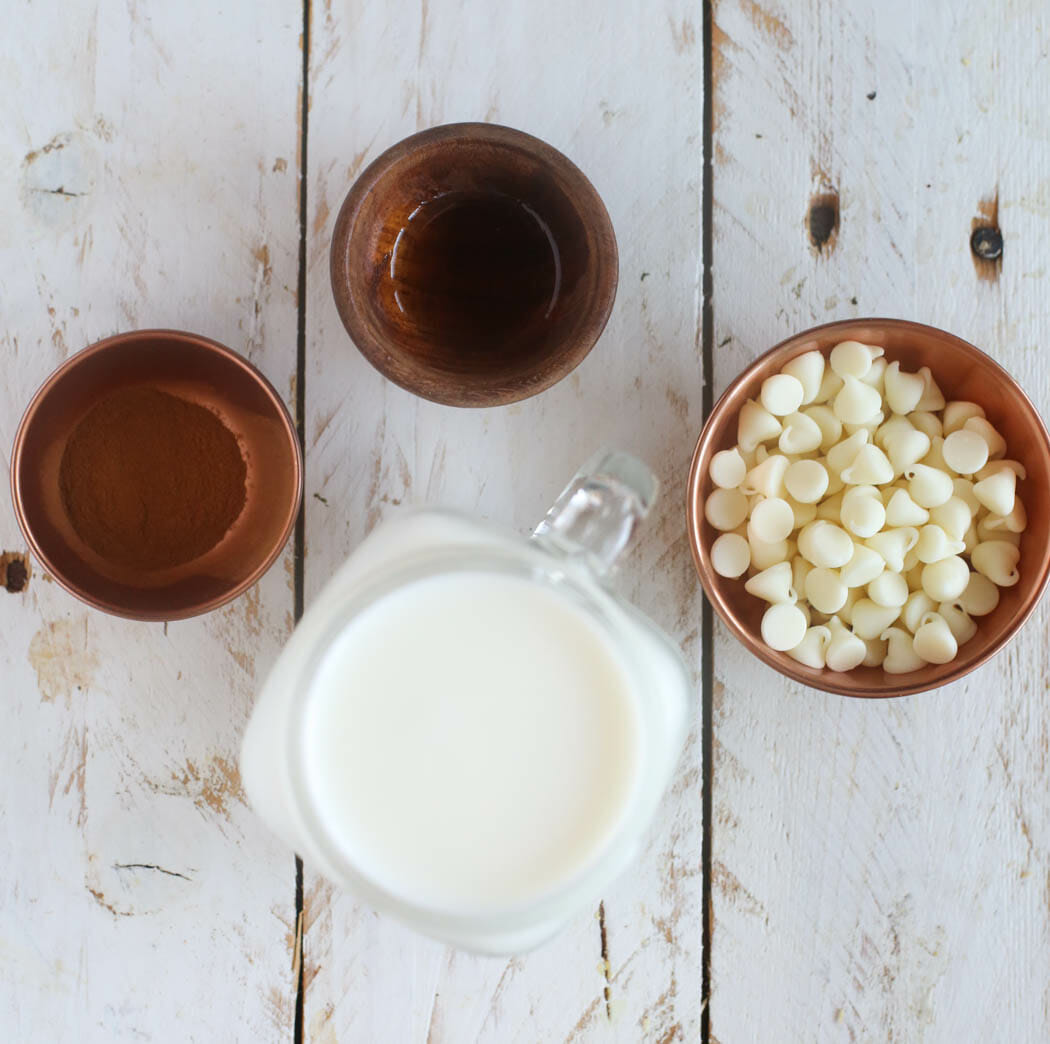 Place the milk in a small saucepan. 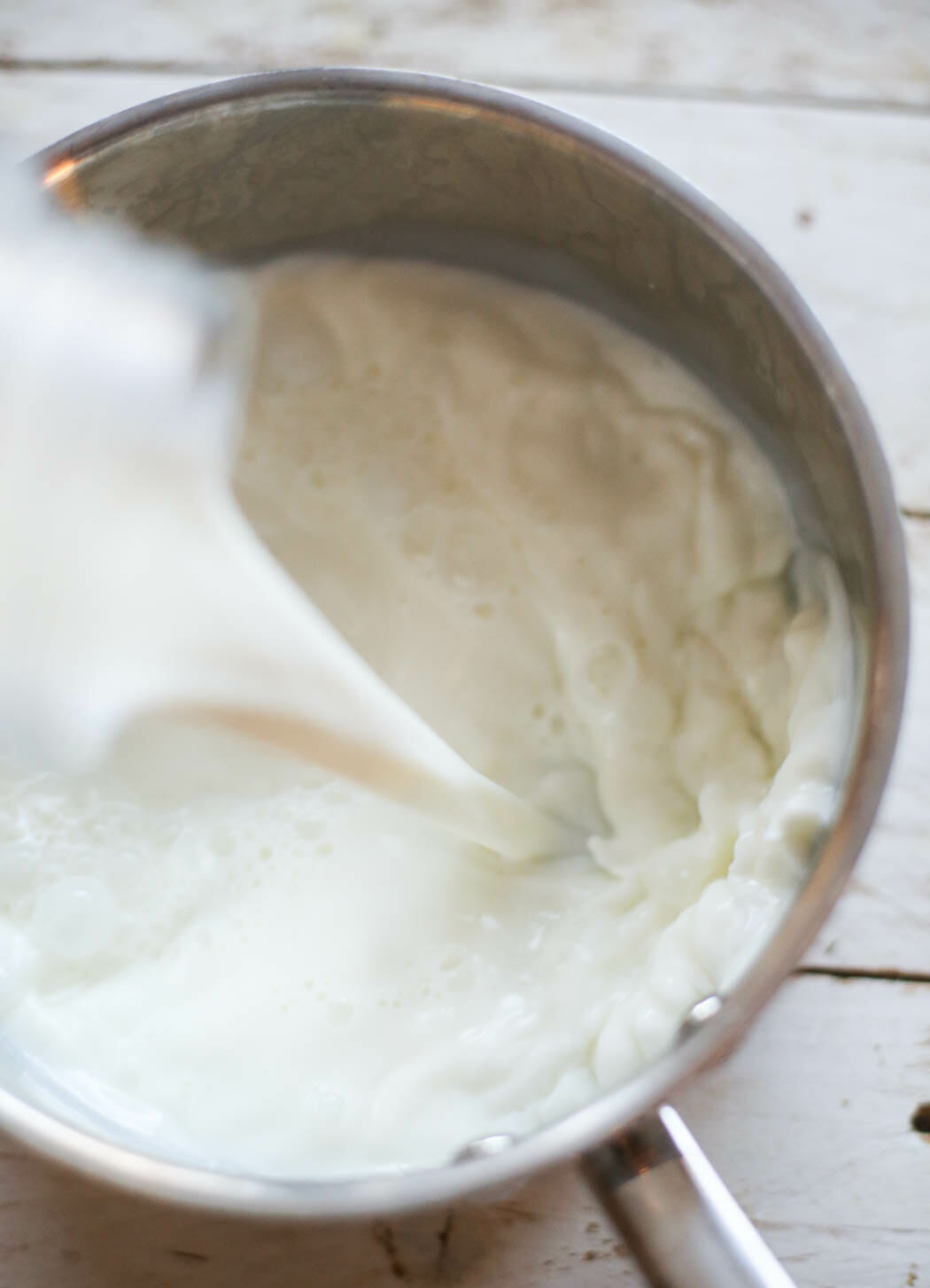 Add in the white chocolate chips… 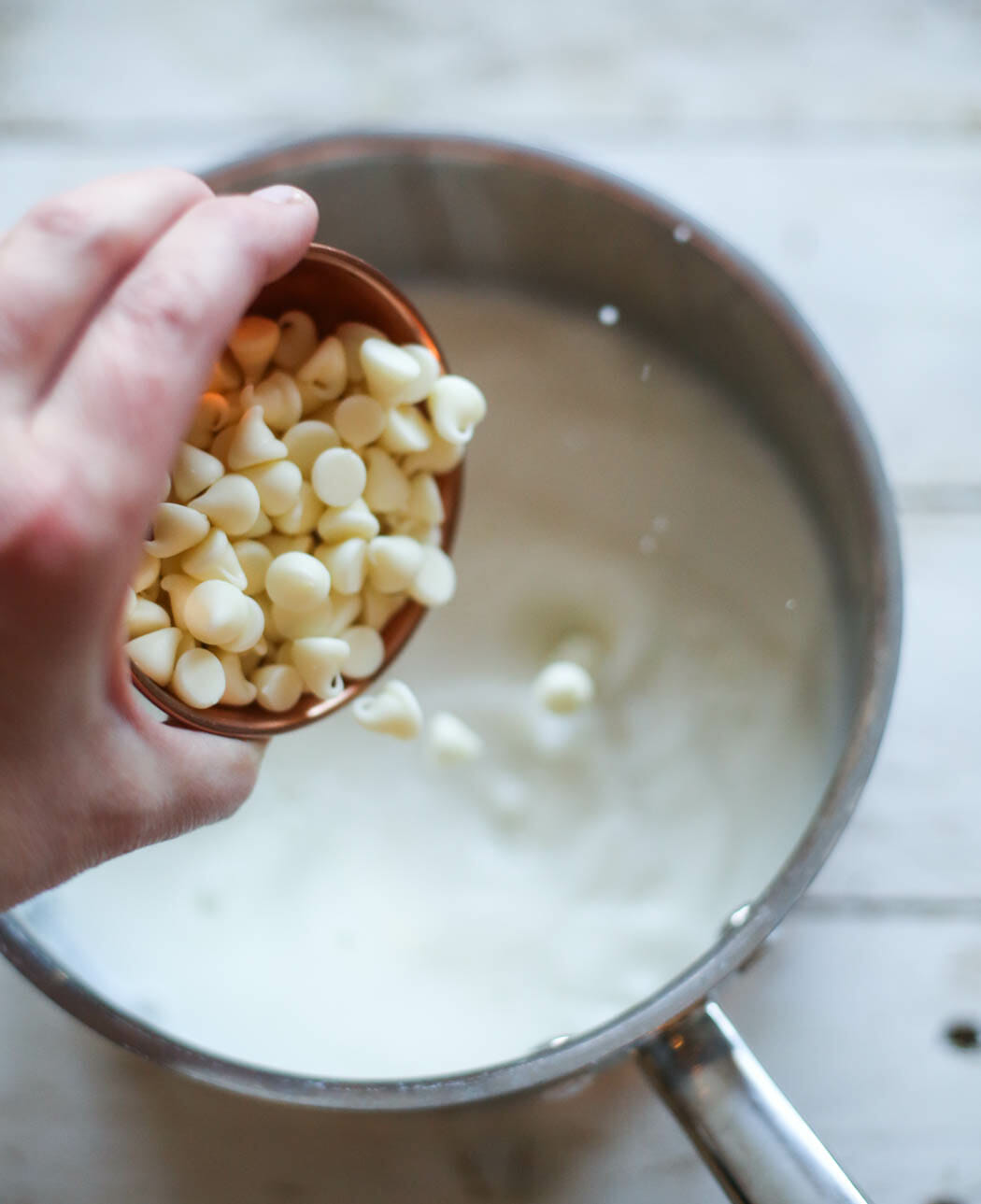 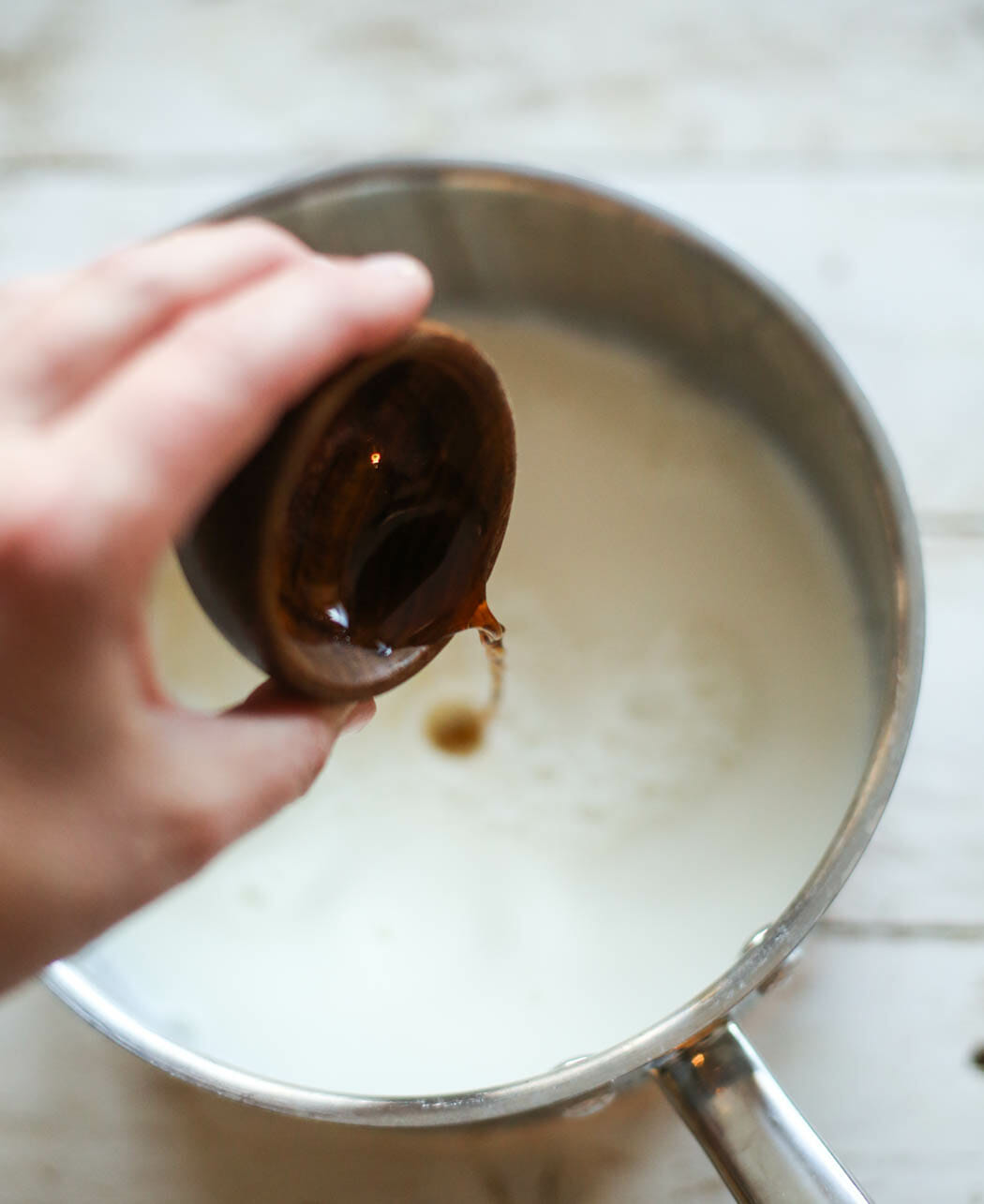 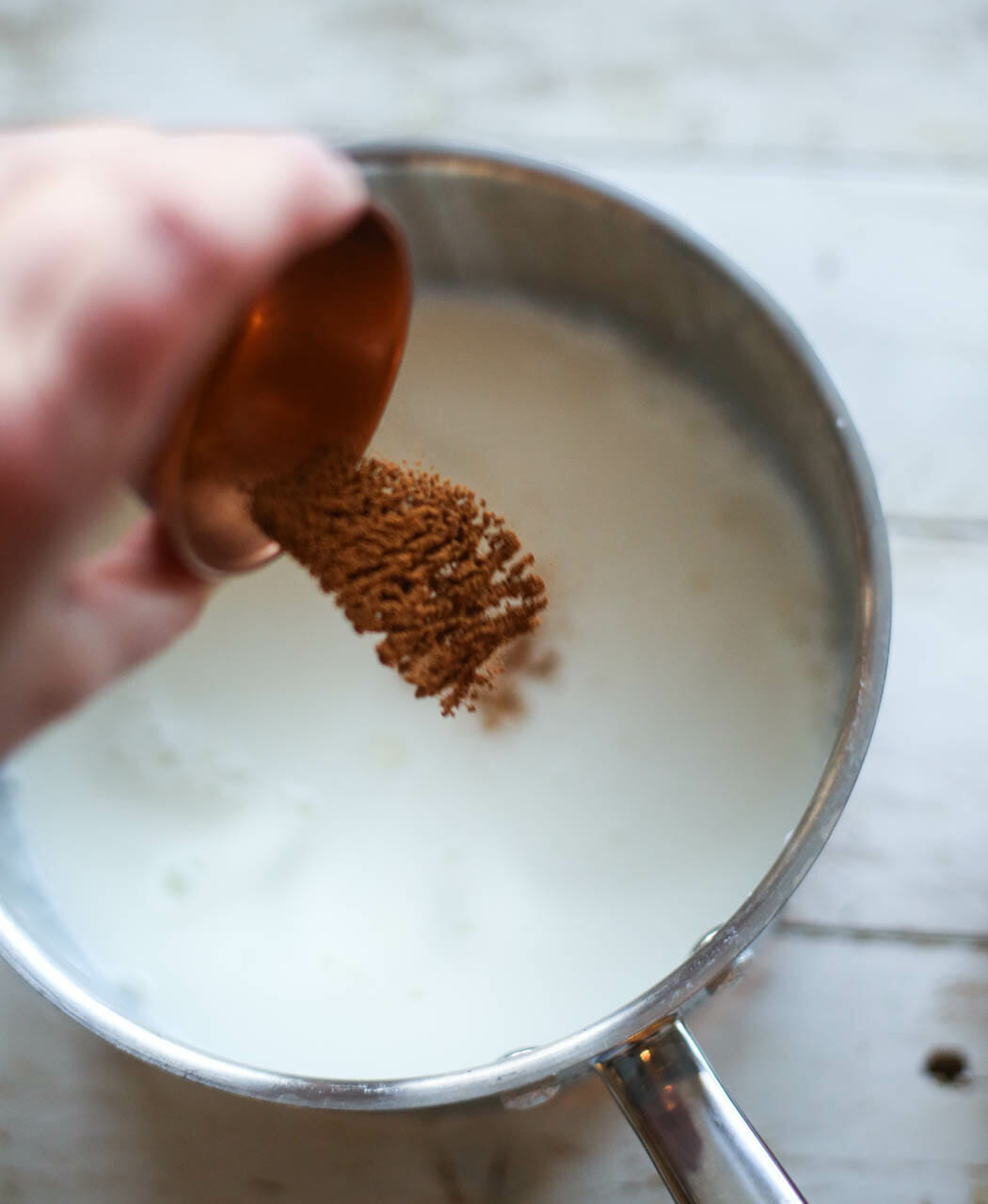 and a generous pinch of kosher salt.

Stir frequently over medium heat until the chocolate is melted and the cinnamon and chocolate are incorporated. Pour into 4 mugs and top with sweetened whipped cream and a sprinkling of cinnamon. Serve immediately. 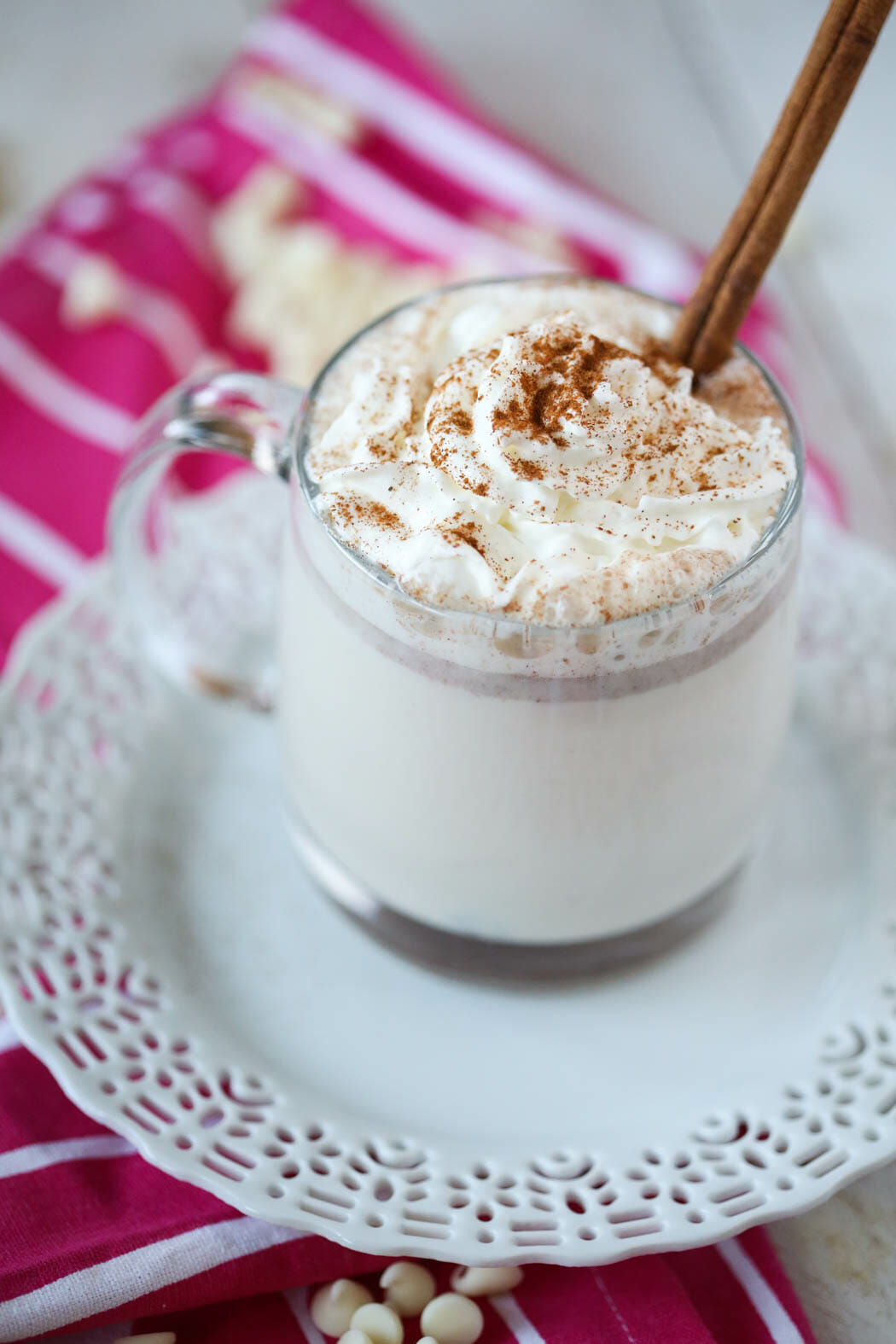 This copycat Starbucks white hot chocolate is filled with cinnamon and hints of almond and vanilla. Serve it with whipped cream and a sprinkling of cinnamon for a warm and cozy holiday treat!

4 cups whole milk
1/4 teaspoon kosher salt
2/3 cup white chocolate chips (you can use a full cup if you want it a little sweeter)
1 teaspoon ground cinnamon
1 teaspoon vanilla extract
dash of almond extract (probably 1/8 teaspoon–be careful, it’s easy to overwhelm all the other flavors with almond)

Combine all the ingredients in a small saucepan. Stir frequently over medium heat until the chocolate is melted and the cinnamon and chocolate are incorporated. Pour into 4 mugs and top with sweetened whipped cream and a sprinkling of cinnamon. Serve immediately.