Sara and I both have this problem where we both have this ONE RECIPE that is always getting the boot because something more timely comes along. I’ve literally had my recipe on the calendar for more than a month now, and it was all set to go today, and then…something happened.

I was perusing my Google Reader one morning when the lovely Brown Eyed Baker posted Pumpkin Whoopie Pies with Maple-Cream Cheese Frosting. I’ve seen them on several blogs recently and the original recipe comes from the book, Baked: New Frontiers in Baking.  (And I believe it was Peabody who brilliantly added maple syrup to the filling.)  Be. Still. My. Beating. Heart. Maybe it’s because the weather has finally started feeling fall-ish or maybe it’s because I’m a total and complete sucker for pumpkin treats with cream cheese frosting, but I knew I had to make these.

But these were a little out of my comfort zone. I mean, I like to bake. Like…a lot. But homemade whoopie pies were new territory for me and I found myself second-guessing the recipe the entire time. It seemed like a lot of salt. It seemed like a lot of cinnamon. It seemed like a lot of oil. It seemed like a lot of batter. Was I setting myself up for failure? Was I making a giant mess for nothing? And what about that maple? I’m not really so much a fan–like, the tiny bottle I have in the picture below is all I have because I hardly ever use it. But I trust the Brown Eyed Baker, and I’m super glad I did. I made two batches of these in a 48-hour period. By the way, if you happen to live in Central Louisiana and you’re not a creeper, feel free to stop by and pick one up. Or 10.

If you’re wondering what a whoopie pie is like, the cakes are kind of like a cross between a cake and cookies that never flatten back down. The batter is thicker than cake batter–kind of along the lines of quick bread batter. 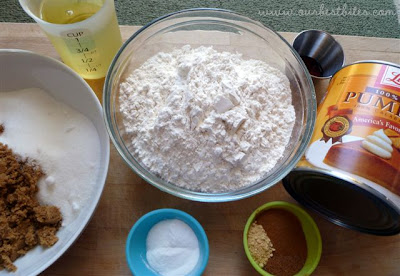 To make them, you sift together flour, salt, baking soda, baking powder, cinnamon, ginger, and nutmeg. 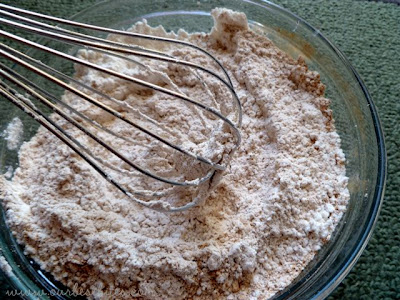 In a large bowl, you beat brown sugar, white sugar, and oil 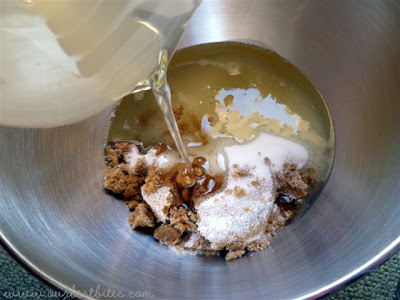 and then add in 3 cups of pumpkin puree (which ends up being ALMOST 1 28-0z. can). Add 2 eggs and then slowly add in the flour mixture.

The second time I made these, I made some larger pies with a 1-tablespoon cookie scoop as well as some smaller, bite-sized ones using a 1/2 tablespoon measuring spoon. 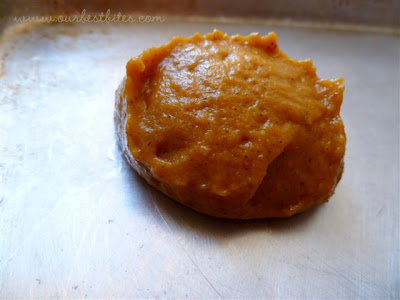 They were both adorable and tasty and I’d totally recommend doing it either way. If you make the smaller ones, they’re a little more manageable and you don’t feel quite so guilty when you’re done, but they take longer to make because you’re using less batter at once. The larger ones are quite impressive (keep your Michael Scott jokes to yourself… 🙂 ), but about halfway through, I always wondered what I’d done and then I’d finish it and then I’d feel bad about myself.

You’ll want to bake them for about 10-14 minutes depending on your oven (mine was 13 minutes on the nose)–you want them to be firm but not overdone. If there’s any hint of jiggle or softness on top, let them bake for another 1-2 minutes. Allow them to cool on the pan for 5 minutes and then transfer them to a cooling rack.

While the cakes are baking, you’ll want to make your filling. 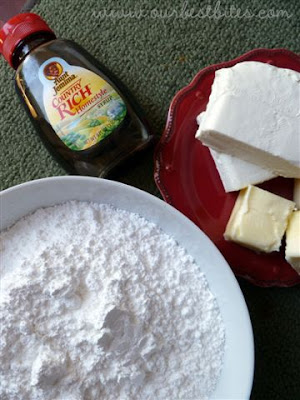 Then flip the cooled pies over on a flat surface. I envisioned some REALLY AWESOME pictures here of dollops of cream cheese filling. And then the battery on my camera died. And I was running out of sunlight, meaning I had to hurry and charge my battery for a few minutes so I could get a good final shot of these babies. Anyway. Squeeze a few tablespoons of filling onto every other cake and then top them off with the remaining cakes. At this point, before anyone else knows, you need to pick one up and feel the luscious texture of the cake. 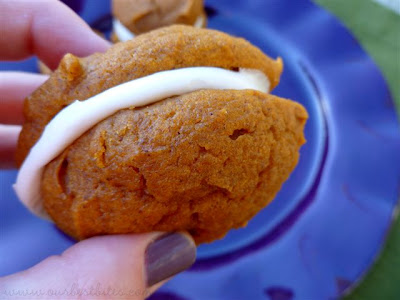 And then take a bite. 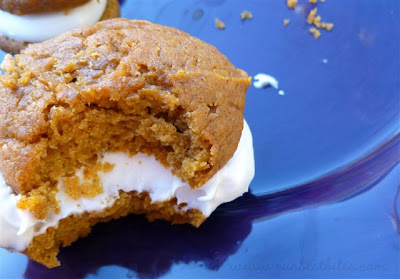 And hurry and finish it off.

And don’t get cream cheese in your hair and/or eyebrows because then everyone will know. I am not speaking from firsthand experience, I am not. And if anyone does ask, you can tell them that’s what you get for making whoopie. Pies.

These can be stored in an airtight container in the refrigerator. They taste awesome cold, or you can allow them to return to room temperature before serving.

Edited to add: Apparently, there is some controversy about the source of this recipe. I saw it for the first time on Brown Eyed Baker who says she got it from a friend. Apparently, it can also be found in Baked: New Frontiers in Baking as well as on a number of other food blogs. 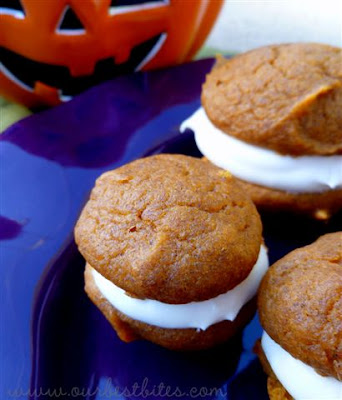 Lightly spoon the flour into the measuring cup and level with a knife. In a medium bowl, whisk together the flour, baking soda, baking powder, salt, cinnamon, ginger, and nutmeg. Set aside. In a large bowl, beat together the brown sugar, white sugar, and oil. Add the pumpkin puree and mix well. Add the vanilla and eggs and mix well. Slowly add in the flour mixture and mix until combined.

Using a 1 tablespoon scoop or a 1/2 tablespoon measure, drop the batter onto a baking sheet (lined, if possible, but not necessary), leaving about 1″ between the batter. Try to keep the batter as circular as possible. Bake for 10-14 minutes or until the tops are done and a toothpick inserted into the middle of one of the cakes comes out clean. Remove from oven and allow to cool for 5 minutes on the pan and then transfer to a cooling rack.

To prepare the filling, beat the butter on high for 1-2 minutes until smooth and fluffy. Add the cream cheese and beat until smooth. Add the powdered sugar, maple, and vanilla and beat until combined. Transfer to a large Ziploc bag and cut 1/2″-1″ off the corner.

Flip the cakes over on a flat surface. Squeeze about 2-3 tablespoons of filling per large whoopie pie (less if you used a 1/2 tablespoon measure) onto every other cake. Top each pie with the remaining cakes. Serve immediately if possible; otherwise, these can be refrigerated in an airtight container. Makes about 30 large whoopie pies.