Cupcakes are super trendy right now and one of the fastest ways to take them from blah to fabulous is to fill them with a surprise inside!  It’s not a ton of extra work and the payoff is pretty substantial.  I’m going to show you a couple of different ways to fill up a cupcake and give you some ideas on easy flavor combinations everyone will love.

The first thing you’ll need is a cupcake.  For the photos shown in this post I decided to go with Lemon-Blueberry so I used this white cake recipe, substituting lemon extract for the almond.  Here’s some other options:

Next comes the Filling:

One of my favorite ready-made fillings for cakes and cupcakes is this Simply Fruit spread by Smucker’s (and no, this isn’t an advertisement- I really do use this!)  You can find it near the other jams and jellies and it has big chunks of real fruit and tends to be less sugary than a normal jam.  If you do use a jam or jelly (which works great) and want to cut the sweetness a bit, try adding a little fresh lemon juice. 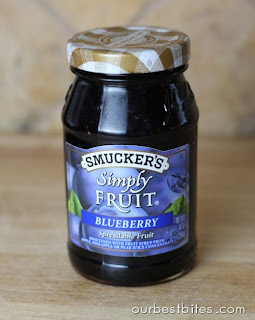 Other great fillings include lemon curd, the chocolate mousse from this post, ganache, and this white vanilla frosting.

How To Fill:
Often when I serve filled cupcakes people ask if I baked the filling inside.  In some cases that works, but generally you fill them after baking.  One way to do it is with a paring knife.  Just cut out a little cone shaped piece and set it aside.  Fill the hole with your chosen filling and then pop the top on when you’re finished. 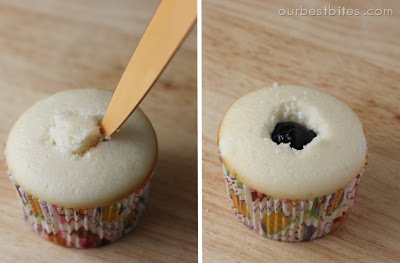 That method is a bit time consuming so I prefer to use a piping bag.  I have a Wilton #230 tip that’s specifically made for filling pastries and things and it works beautifully.  But if you don’t have this tip, you can use another wide-holed tip. 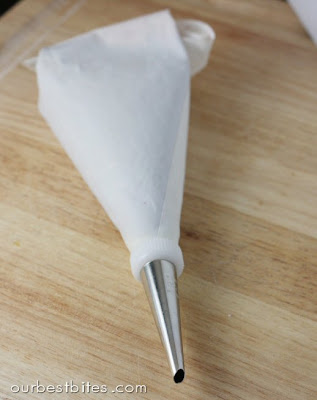 If you’re using a piping bag you’ll want to make sure your filling doesn’t have chunks in it that will get stuck.  My blueberry filling for example was too chunky so I ran it through the food processor with a little lemon juice so it was nice and smooth.

Then you just pop the tip into your cupcake and press down so it’s near the bottom of the cupcake (but not so much that you hit the counter!)  Then as you give the bag a squeeze, pull up at the same time.  You can actually feel it filling up and it happens really fast.  It doesn’t take long to fill a large quantity of cupcakes this way. 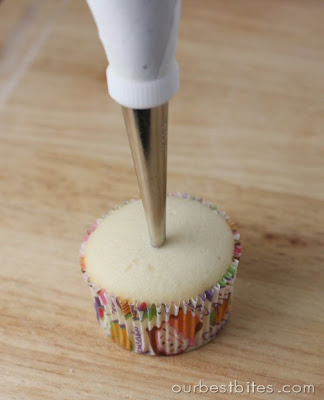 When you’re done you’ll be left with little holes at the top, but that’s fine because you’re going to frost them anyway so no one will ever see!  If your filling is popping out like mine is, just scrape it off with a knife so it’s flush with the cupcake top. 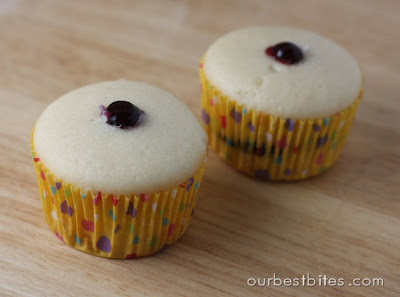 Top it off:
Next you’ll want to top the cupcake.  We love this vanilla frosting, and this chocolate one.  There’s also Swiss Meringue Buttercream with does great with all kinds of flavor add-ins.  And   Ganache makes an amazing and decadent topper (like in these amazing cupcakes).

In most cases I think it’s fun to garnish your cupcake with a hint of the flavor inside, or the flavor combo all together.  In my case, I popped a little blueberry on top and colored my lemon frosting a pale yellow (I used this frosting with lemon extract- one of my most favorite combos) 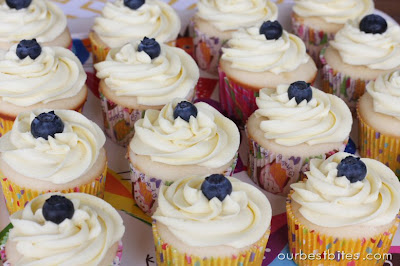 Adorable, right? (The tip to get those nice swirly tops is the Wilton 2D) 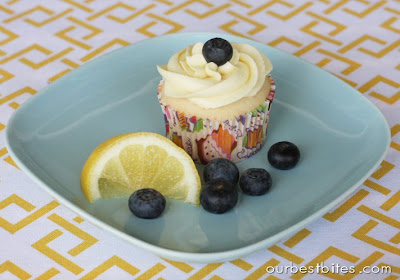 And then when you get to the inside- surprise! 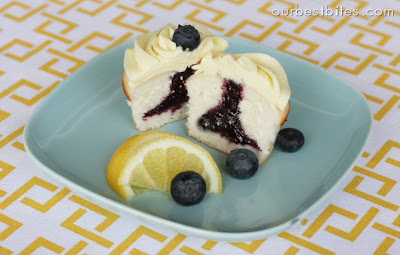 One of my other favorite combinations is chocolate cupcakes with raspberry filling.  Then either chocolate frosting, or Swiss Buttercream mixed with Raspberry puree.  Garnished with fresh raspberries and chocolate shavings they’re simply to die for!  The combinations are endless though, so get creative and turn your simple little cuppy cakes into show stoppers!